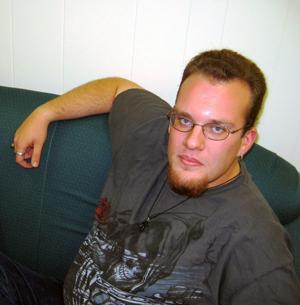 Chuck E. of Union County (NJ) is modest when speaking of his phenomenal success toward wellness and recovery from bipolar disorder.

“Yes, I have had successes,” the 25-year-old says, but adds that he will not feel truly accomplished until he is living on his own, has a job and is a contributing member of society.

Chuck already is well on his way toward those goals due to his steadfast determination, the support of SERV Behavioral Health System, and SERV’s staff members who have worked with him during the last four years.

Diagnosed with bipolar disorder in 2003 at the age of 20, Chuck not only has shown enough progress to recently graduate to a Level-B apartment run by SERV, but also has earned the “January” spot in the N.J. Psychiatric Rehabilitation Association’s 2009 calendar for his brilliant artwork titled “Intake.” This is considered a prestigious honor, as mental health consumers from all over New Jersey entered artwork in the contest and only 12 were chosen.

The pen-and-ink drawing with watercolor wash is a self-portrait, depicting a man in profile, holding a cigarette smoldering with words. Surrounding the man is a halo of jumbled “deep, probing questions – both positive and negative” that he endured countless times during the intake process at several hospital psychiatric units where he was a patient prior to joining SERV. 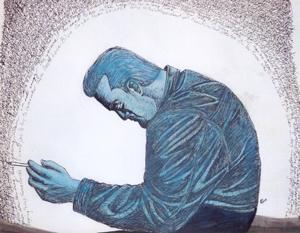 “It was one of the hardest pieces (of artwork) I ever had to do,” Chuck says. The piece depicts “desperation” and “the hopelessness that you feel when you are stripped of your humanity.” The cigarette conveys “the only comfort I had at the time,” adding that he quit smoking 1½ years ago.

Chuck came to SERV in 2004 through a referral by Trenton Psychiatric Hospital. Once he was stabilized on medication for bipolar disorder (extremes of mood from mania to depression) and ready for discharge, SERV accepted Chuck into its residential program. “I have hopes that Chuck will someday live independently,” says his current Residential Program Manager (RPM), Sonia.

That goal is exactly what Chuck aims for and he knows the means by which to attain it. It is imperative, he says, to continue to nourish his mind, body and spirit.

Once plagued by paranoia, hallucinations and thoughts of injuring himself and others, Chuck knows that his medications keep him on the steady road to recovery. And he credits SERV for the positive transformation he has experienced during this journey. “Everybody at SERV has been so supportive … keeping tabs on me to make sure I am stable.”

Chuck’s story of mental illness began around age 19, when he was a student at Rochester Institute of Technology studying medical illustration. He started to experience deep depression, paranoia, and thoughts about hurting himself and others. “I found ways to justify it or make (these thoughts) seem reasonable,” he recalled.

When he finally verbalized his disturbing thoughts to his parents, he took the first step toward his journey toward wellness and recovery. Three psychiatric hospitals later, and a final diagnosis of bipolar disorder with psychotic features, Chuck eventually was stabilized with the proper medications.

He then was discharged from Trenton Psychiatric Hospital and moved into a SERV group home in Union County, where he received 24-hour support.    He had done so well on his recovery plan that he later was stepped-up to a SERV apartment with two roommates. Now, he receives support from his RPM and other staff daily. He maintains structure by attending school, taking his medication independently and doing household chores.

Chuck currently is enrolled part time at duCret Art School in Plainfield to earn a degree in graphic arts. He acknowledges his talent for magazine advertising and product labeling and aims toward a career in graphic design.

Physically, Chuck is eating better and losing weight. He also has stepped up his physical activity because it’s “too easy to sink into a sedentary lifestyle.”

To nourish his spirit, he has again become involved in his church in Dumont. In addition, he practices the art of meditation, oftentimes visualizing a forest because he finds it “peaceful.”

Chuck would like people with mental illness to know that SERV Behavioral Health System offers more than medical support and supervised residential homes and apartments. The most important thing, he believes, is the support he gets from his Residential Program Manager. He cites the times his RPMs offered him encouragement and guidance, knowing just the right time to “back off” a little to see how he progressed on his own. Because of this close contact, the staff knew when it was time for him to graduate from a group home of five people to apartment living with two roommates.

He also acknowledges that family support is a huge factor in getting well. “My parents were by my side every step of the way and it made all the difference,” he says.

Finally, Chuck is looking for ways to continue to contribute to his community. His plan is to get off Supplemental Security Income (SSI), be self-supporting, make a living in the graphic arts field, and, yes, even pay taxes. But, more important, Chuck hopes to share his story with other people with mental illness and their families, perhaps at a mental health conference.

“I am blessed and cursed to remember everything from when I was symptomatic,” he explains: “Blessed, because it drives me to stay on meds and to keep bettering myself, and cursed because I have to remember it. I know what it’s like to hit rock bottom – multiple times – and claw your way up. I’d like people to know it can be done.”