SERV consumer’s artwork displayed at museum for people with disabilities 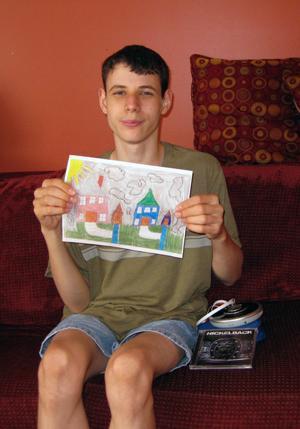 Therefore, when the 18-year-old consumer with SERV Achievement Centers was asked by his teacher at The Academy Learning Center in Monroe Township to draw “My Neighborhood,” that is how Christian accurately depicted the SERV group home where he lives in East Windsor, N.J.

Rachel Stern, the teacher at the school for students with autism or autistic-like behavior, saw something special in Christian’s crayon-and-pencil artwork and submitted it to the Arts Unbound museum in Orange, where it was selected to be on exhibit for a month in March.

The opening art reception at the museum “was just wonderful,” says Dr. Erik Solberg, principal of the school. “Christian was just beaming from ear to ear. He is a very shy, young man … and I think it was a wonderful boost to his self-esteem that his work was accepted and exhibited.”

According to Dr. Solberg, Christian’s teacher encouraged him to do several drafts until he created the final submission. “It’s an educational technique of revising what you are doing,” says Dr. Solberg, who noted that the drawing is now framed and hanging in the school.

Christian, who is developmentally delayed and has autism, was delighted to have his artwork on view with others in the gallery at Arts Unbound, a nonprofit organization dedicated to the artistic achievement of youth, adults and senior citizens with disabilities. According to the Arts Unbound website, the organization is “committed to unleashing the artistic expression of persons living with developmental disabilities, mental illness and physical challenges.” 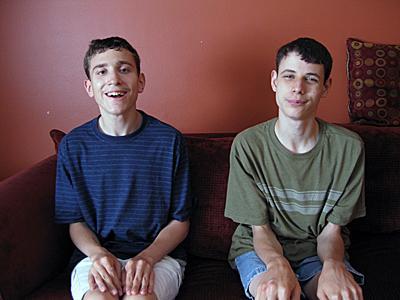 Brothers Joey, left, and Christian sit in the living room of the SERV Achievement Center group home where they live in East Windsor.Christian and his brother Jose (“Joey”), 19, who has the same diagnosis as his sibling, have been with SERV Achievement Centers since 2006. Their association with SERV Behavioral Health System began when they transferred from the state Division of Youth and Family Services to SERV’s Supervised Apartment Program with 24/7 support in Middlesex County. In 2008, they moved into a 4-bedroom SERV group home in East Windsor, which they share with two other consumers with developmental disabilities, Terrance, 14, and Ivan, 17, all of whom have their own bedroom and get around-the-clock support from SERV staff.

That support includes encouraging the consumers’ interests and helping them to build on their Activities of Daily Living (ADL) skills, with the goal of greater independence. “I believe Christian and Joey could one day live alone, with occasional support,” says house manager Nicole Rafalowitz. “We are trying to build their skills, so they eventually can do it on their own. Those skills include cooking, laundry, washing dishes, cleaning their room, and of course, communicating,” she says.

The hallmark feature of autism is impaired social interaction, therefore, encouraging the consumers to communicate spontaneously, without prompts, is paramount, says Nicole. “We say to them, ‘Use your words to explain,’ and then we give positive reinforcement (when they do).”   To that end, the siblings have frequent correspondence with their mother in northern New Jersey through handwritten letters and phone calls. (For more information on autism spectrum disorders, visit the National Institute for Neurological Disorders website.) 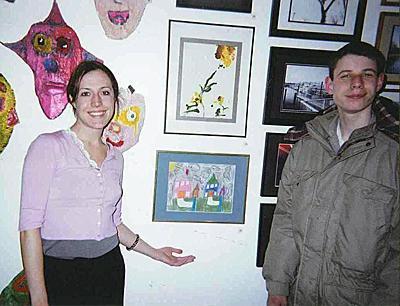 Christian and Nicole at the art exhibit opening at the Arts Unbound museum in Orange.In addition to communicating verbally, Christian expresses himself through his art. Using crayons, markers, colored pencils and paper supplied by SERV, he often draws his favorite Nickelodeon cartoon character, SpongeBob SquarePants. One such drawing hangs on the wall in Nicole’s office at the group home.

Joey, a student at The Academy Learning Center, also has an interest in drawing, but his clear love is music. "Christian and Joey both are into music,” says Nicole, who notes that they are usually carrying around their personal CD players. The brothers use some of the wages they earn from area stores and restaurants through the work study program at their school to purchase their favorite music. Buying CDs recorded by Nickelback (rock) or Chris Brown (R&B) is the reason they relish their outings to the mall.

Nicole says Christian and Joey are bound together not only by their familial relationship but also by their common interests. They do nearly everything together and are usually game for any activity as well, she says. The brothers and their roommates are members of Club Hero at The Arc Mercer, which sponsors monthly activities, such as dances, for individuals with developmental disabilities. Their membership fees are paid by SERV.

Last spring, Nicole introduced the young men to the all-American game of baseball through the Special Olympics organization. The brothers each played in the outfield during the season and then enjoyed a closing ceremony with all team members at The College of New Jersey in Ewing.

When they are not involved in outdoor activities or building on their daily living skills, the brothers and their roommates enjoy playing race car video games and Wii bowling and tennis in the spacious, first-floor living room of the group home.

It is, indeed, a home for these young men who are gradually building a more independent and meaningful life outside the walls of an institution.