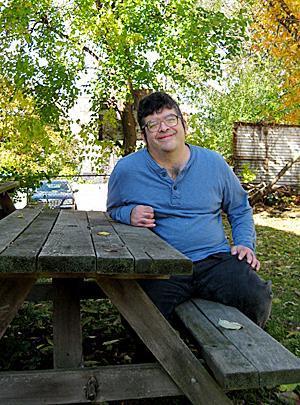 Ask Harry T., a sports enthusiast and an avid Mets fan, if he is following the 2009 World Series games on television during this first week in November, and he answers, “Nah, I don’t like the Yankees.”

But, if there is a Giants or Jets football game, a Nets or Knicks basketball game, or a Devils or Rangers hockey game any time on television, Harry is usually parked in front of his television set in his two-bedroom apartment operated by SERV Centers Passaic County.

Harry, 44, has been a consumer with SERV Behavioral Health System, Inc. for 20 years. During this time, he has advanced through nearly every level of residential services and programs SERV Centers of New Jersey has to offer for individuals with severe and persistent mental illness.

Depending on his needs at the time, Harry -- who has paranoid schizophrenia, a mild intellectual disability and high anxiety -- has thrived within several levels of SERV’s residential settings, including a group home with staff supervision 24/7 and in a family’s private home with trained home care providers in the Therapeutic Foster Care program.

Today, Harry is content in the A-level apartment he shares with SERV consumers Anthony and Jeff, where staff is on site 15 hours a day. At any time, he can stop in to talk with his Residential Program Manager Karen Buroff or any other SERV staff member in the office located in the four-apartment building.

On Oct. 30, SERV’s Passaic office presented Harry with a Consumer Recovery Award for continuing to take positive strides to better himself. He was nominated for the award by his roommate Anthony.

“I have never come across a young man such as Harry who puts in 100 percent effort to constantly achieve higher goals for himself and to inspire other clients to try and do as well,” Anthony wrote. “After a long stay in home care, Harry, through constant drive to achieve, (is always showered and changed) and is on his way to his day program, way before I’m even out of bed.   Harry uses all his tools of recovery at his disposal to improve himself and always does better and better.

“Harry is always willing to engage an individual in casual conversation about what’s going on in the world of sports and the political arena,” Anthony added. “As hard as I try, I cannot keep up with the way he approaches his daily tasks at living life. … He never swears or acts improperly and I wish that I could be like him.”

While humbled by the award, Harry says he “felt pretty good about it.”

According to Ms. Buroff, Harry continues to advance toward recovery because of the right mix of staff support he receives and through his own diligent input. “His medications are a good fit for him, the staff is a good fit for him, and his day program at Community Care in Morris Plains where he attends various group sessions five days a week is a good fit.   This is a good combination of the right support plus Harry putting in tremendous effort. All together, you have somebody who excels.”

Maritza Skibola, Harry’s former case manager in the Therapeutic Foster Care program for more than six years, concurs. “The key with Harry is that he understands his illness,” she says. “He accepted his illness very early on and grew to understand…that this is why I am the way I am.   He reads up about it on the Internet and he is always in the know. And foremost, Harry never refuses his medication, therefore his symptoms are stable. He has not been hospitalized in many years.”

Ms. Skibola beams as she recalls a time two years ago when Harry’s mother called her to tell her of a proud moment she had with Harry when she took him on vacation to Disney World.  As oftentimes happens in a crowded setting, mother and son got separated. Because of Harry’s past experiences with anxiety in a high-stress environment, his mother wasn’t sure how he would react to the situation. The two eventually reconnected via an intercom announcement, and, his relieved mother reported, “He was standing there cool as a cucumber. He didn’t panic.”

Anxiety was at a minimum, as well, when Harry transitioned in July from the foster-care family’s home, where he had fewer responsibilities, into his new living arrangements.  Along with apartment living comes more individual responsibility, says Ms. Buroff, noting that staff will instruct and assist the residents in activities of daily living if there are any difficulties. Residents are expected to clean all rooms, make their bed on a daily basis, and do their own laundry and cooking.

When it comes to grocery shopping, Harry does not consider it a chore. He likes to pore over newspaper circulars and clip coupons before heading to the supermarket with staff. Following his own shopping list, he heads up and down the aisles and makes sure to read labels for nutritional facts. A thoughtful person, he often purchases a few other goodies he knows his roommates will like, all the while making sure to stay within his budget.

“Following a budget is a big change for Harry,” says Ms. Buroff. “He decides how to spend: he pays his cable bill, writes the rent check, and balances his checkbook.” Because Harry is very involved in the residents’ weekly outings, he makes sure he has enough money to shop at area department stores and to go to restaurants and Friday night movies.

Harry rates the outings among the top three things he likes about SERV, directly behind “good staff and good medical services.”

His friend and roommate Anthony would agree. “He is the type of individual who inspires other clients to follow in his footsteps.”