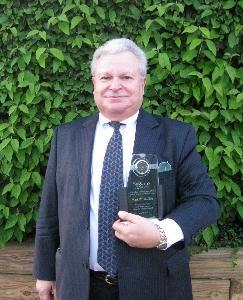 Every year, tennis players in the community look forward to the time-honored Volley For SERV Tennis Tournament, held at the exclusive Cherry Valley Country Club in Skillman.

As with the previous 21 events, this year’s major fundraiser for The SERV Foundation held all the amenities that the players have come to expect -- quality courts with stiff competition from other players, exquisite food prepared by an award-winning chef, musical entertainment, silent and live auctions, the drawing for the Super 50-50 Cash Raffle, and the awards presentation.

This year, however, guests were treated to an extra special evening program during which they had the opportunity to hear firsthand about SERV’s beginnings in 1974 from one of its original founders, Mark W. Fox, Esq., who traveled from Florida with his wife Joanna to accept the SERVice Award being presented to him that night.

After his introduction by SERV board member Dr. Paul Lehrer, the only current board member who served on the board during Mr. Fox’s tenure as chairman and president (1974-1988), Mr. Fox relayed to the audience about the frustrations he had felt for families who had loved ones with emotional problems.

“At that time, families who had emotionally troubled family members had nowhere to turn but institutions,” he said. “We believed that people did not belong in mental hospitals because their families couldn’t cope with them. Today, this is understood, but back then, it was a new concept.”

Advocating, pro bono, on the families’ behalf, Mr. Fox, who was an attorney in Middlesex County in the early ‘70s, and a few mental health professionals with Rutgers Community Mental Health Center presented a grant proposal to the then-N.J. Department of Mental Health to provide “semi-independent supervised living.”

With the ensuing grant of $156,000, SERV Centers of New Jersey began to provide staff-supervised apartments plus mental health services to eight consumers in Middlesex.

An ironic element Mr. Fox pointed out was that the first board meeting for SERV Centers of New Jersey was held in the same building in Middlesex that houses the Central Region office today.

Mr. Fox, now a partner in a law firm in Florida, said he was overwhelmed to see how SERV had developed into the multi-faceted human services organization it is today. The idea that a small organization that began with 8 consumers and one van in Middlesex County had grown to 725 residents in eight counties with a fleet of vans was “mindboggling,” he said.

In 1983, when SERV purchased its first building, SERV dedicated the apartment building in Middlesex to Mr. Fox and named it “Fox Terrace.” Today, this building is home to 13 residents over the age of 55.

Mr. Fox and his wife Joanna have two children. Their daughter Jill and her husband Jeff Bruso reside in Freehold, NJ, and attended the awards reception. The Fox’s son Jason and his family live in Florida.

Another special guest during the evening reception was Charles A. Villano Jr., the recipient of the 2nd annual Lou Natale Players Award, given to an individual for continual support of SERV through participation in and sponsorship of Volley For SERV.

“Charlie is a very caring person and a genuinely good man,” said Ted Golfinopoulos, Chairman of this year’s event. “He was close to Lou so this award has special significance for Charlie, who is very deserving of the honor.”

The award was presented to Mr. Villano by Jo Natale Cameron, daughter of the late Louis A. Natale Jr., for whom the award is named.

Like his friend Lou, Mr. Villano played in the B Division at Volley For SERV for many years and made generous donations to the event’s silent auction through his business.

Mr. Villano said the award is very special to him as Lou introduced him to Volley For SERV nearly 20 years ago. “This is one of the nicest awards that has ever been given to me because of my relationship with Lou. He was one of my best friends.”

Mr. Villano, president of Forbes Liquors in Brick, and his wife Sherry live in Seaside Park. They have two children, Cynthia Villano, who attended the reception; and Charles A. Villano III, who lives with his family in California.

The Volley For SERV Tennis Tournament is the major fundraiser for The SERV Foundation. With 72 players, 122 reception attendees, and silent and live auctions, the 22nd annual event raised a net profit of $34,440 for the Scholarship Fund and the Recovery NJ Conference. That figure includes the Super 50/50Cash Raffle, which this year had a $20,850 jackpot.

First-place winner was Constantine Larigakis of Riverside, who won 40% of the total raised ($8,340); second-place winner was Ward Bauman, who received 10% ($2,085). Both men generously donated a portion of their winnings back to the Foundation.

With any successful fundraiser, committee members and volunteers play a critical role. The 2012 VFS event included friends from the community and SERV board members, staff and consumers.

Tennis contest champions and finalists were:

All of the finals were called by Brad Werner, co-owner of Pennsbury Racquet & Athletic Club in Morrisville, Pa.