Tennis players from Mercer County and beyond came out in force on June 17 to participate in the 23rd annual Volley For SERV Tennis Tournament.

The seventy-four players participating in five doubles divisions and one singles division not only played on courts at one of the most exclusive venues around, the Cherry Valley Country Club in Skillman, but also stepped up to support a worthy cause for individuals throughout the state with mental illness and/or developmental disabilities.

Beth Deitchman, left, and Cari Werner face off against their opponents in the Women’s A Division finals.

The SERV Foundation, sponsor of the event, raised nearly $35,000 to finance special programs for consumers of SERV Behavioral Health System, Inc., such as the Scholarship Fund and the annual Recovery NJ Conference.

In addition to the usual amenities that players have come to expect at the fundraiser, this year the 128 attendees at the evening reception had a special treat – to hear a consumer with SERV Centers of N.J.-Central Region tell his inspiring success story. Viral M., a consumer since 2005, held everyone's attention as he shared about his struggle with chronic paranoid schizophrenia and how SERV counselors supported him through his recovery. Also in attendance were his proud parents. 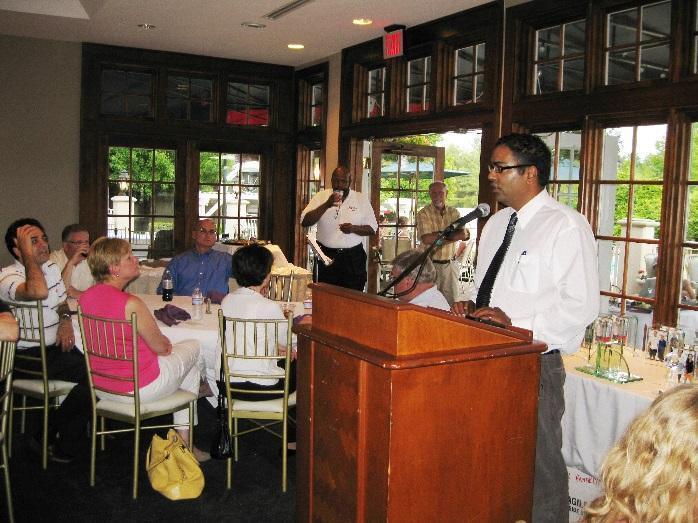 Viral M., a former consumer with SERV Centers-Central Region, tells his inspiring success story to reception guests at Volley For SERV. Viral M., a consumer since 2005, held everyone's attention as he shared about his struggle with chronic paranoid schizophrenia and how SERV counselors supported him through his recovery. Also in attendance were his proud parents.

Viral talked about his progress as he advanced through SERV's continuum of services and, when he felt he was ready to complete his graduate work at Pace University, decided to apply for tuition money from The SERV Foundation Scholarship Fund. Because of the-financial aid he received, he was able to graduate with a master's degree in substance abuse counseling. Viral now has a full-time job as a counselor for an agency in Newton and recently moved out of SERV to live independently in the community.

The evening reception at Volley For SERV also is when SERV presents awards to individuals who have helped to support the mission of SERV.

Jack H. Fein received The SERVice Award, an honor presented annually to a past or current SERV board member.

For 14 years, Mr. Fein has been a dedicated member of the SERV Behavioral Health System Board of Directors. A CPA for many years, Mr. Fein has generously offered his expertise in all financial matters, while also demonstrating his commitment to the mission of SERV. Since 1999, Mr. Fein has served on the SBHS board either as a treasurer or secretary. Currently, he also is Chairman of the Finance Committee for SBHS. 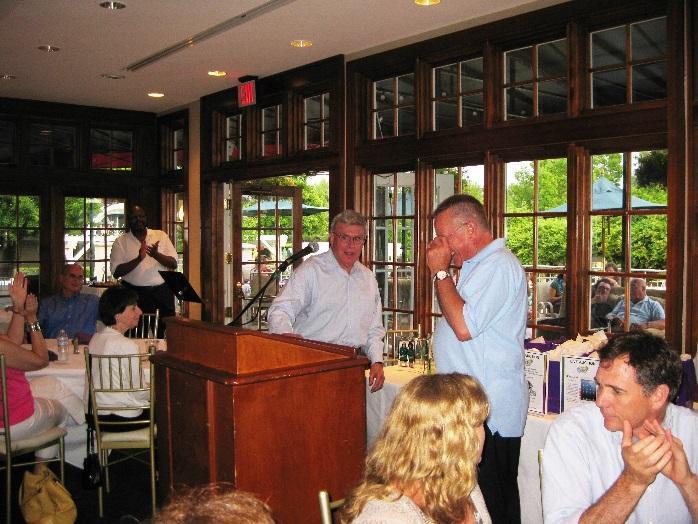 Jack Fein, a partner with Mercadien, P.C., CPAs of Princeton, steps up to the podium to receive The SERVice Award from SERV President and CEO Gary van Nostrand for serving 14 years on the SERV Board of Directors.

"I've seen what SERV has done for the community," said Mr. Fein. "SERV is a well-run non-profit organization with a great reputation with the state. I've seen the operating budget more than double in the time I have been with SERV."

"Jack is a great guy to have around," said President & CEO Gary van Nostrand, who made the presentation. "He keeps a cool head, gives good advice and has a great sense of humor. Sometimes the last is the most important!."

As a partner with the accounting and management consulting firm of Mercadien, P.C., CPAs in Princeton for more than 40 years, Mr. Fein works with more than 85 non-profit organizations.

From the first Volley For SERV in 1990, Mr. Loff has been a steadfast supporter of SERV's major fund-raising event. Not only has he competed in nearly all of the previous 22 tennis tournaments, he has been a longtime supporter of SERV in its fundraising efforts. He also served on the VFS Committee in years past.

"I think SERV is a very worthwhile organization (to support)," said Mr. Loff. "I've always liked not only the competitive play format at Volley For SERV, but also that it's social with the unique evening reception." 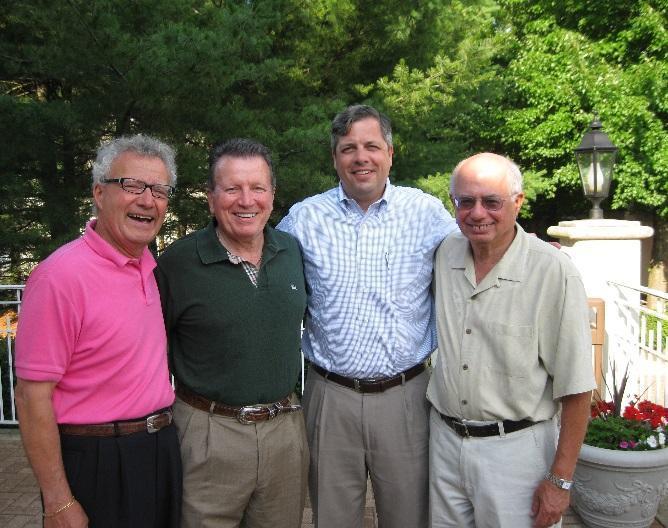 Chris Natale, second from right, presented the 3rd Annual Lou Natale Jr. Players Award earlier in the evening to Donald J. Loff, second from left, at the Volley For SERV reception at Cherry Valley Country Club. Also pictured are two previous winners of the Natale Players Award, Charles Villano (2012), left, and Barry Szaferman, Esq. (2011), right. "The Lou Natale award means a lot to me," he added. "Lou was a very good friend and one of the nicest, most genuine people anybody could meet in a lifetime."

Mr. Loff is Senior Vice President of Investments for Merrill Lynch in Princeton, where he works with The Loff Group team.

Following the presentation, Brad Werner, co-owner of Pennsbury Racquet and Athletic Club in Morrisville, Pa., handed awards to the winners and runners-up in each tennis division played earlier in the day. They were:

One of the most anticipated events of the evening was the drawing of the Super Cash Raffle. This year, Dr. Paul Lehrer, a longtime SERV board member, and Gladys Schweikert of Bucks County, Pennsylvania, were the 1st- and 2nd-prize winners, respectively. The Foundation raised $16,200 in the raffle; Dr. Lehrer won $6,480 (40% of amount raised) and Ms. Schweikert won $1,620 (10%).

The SERV Foundation would like to thank corporate sponsors, advertisers, area businesses and individuals who donated silent and live auction items, tennis players, guests, committee members and volunteers for their invaluable support in making the 23rd annual Volley For SERV Tennis Tournament a tremendous success.

Congratulations to the winners and thank you to all who supported the fundraiser.

The SERV Foundation will again publish its fund-raising 2014 SERV Art Calendar, which will feature original works of art created by consumers.

We are offering small businesses, large corporations and Chambers of Commerce the opportunity to advertise services and products at a reasonable cost in this full-color calendar -- with the added feature of a link from our website to yours.

The 8½ x 11-inch calendar, which will be in a horizontal format on quality paper with a satin finish, will feature each of the 10 art contest winners on one month. It also will include SERV's 2013 Annual Report financials.

The 2014 calendar will be mailed in early November and will include a remittance envelope. All donations will go directly to support programs of the SERV Foundation, such as the Scholarship Fund and the annual SERV Recovery NJ Conference.

Click the following links to view our budget-friendly price sheet  and sample advertising space. Please note that if you are an upper-level advertising sponsor, your logo will appear on SERV's website and will link to your home page.

We hope you will select one of these sponsorship options to help support the SERV Foundation. The deadline for your camera-ready ad – in .jpg or .pdf format – is September 6.

If you have any questions, please contact Ida Doolan at (609) 662-3066 or This email address is being protected from spambots. You need JavaScript enabled to view it..

Who couldn't use some extra scratch to indulge in a guilty pleasure; or, to be more practical, perhaps pay off a credit card?

Read more: You can win thousands of dollars in SERV’s Super 50/50 Cash Raffle